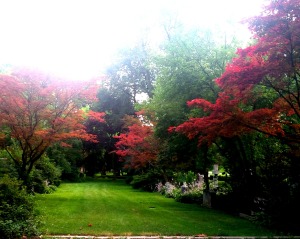 When you think of an alien, you imagine little green creatures with bulging eyes and frog feet. Why on earth were we ever called ‘aliens’ in Thailand beats me.

It’s strange to be dismissed as an ‘alien’ after living in a country for ten years. No kidding, that’s what we poor expats (okay, okay…reasonably well-off expats) were officially termed back in Bangkok. That often confused us. Were we welcome or not?

Fact is, till the time expat workers have a job, you are welcome in Thailand. The day you quit, you are mercilessly turned out.

I’ve been often asked why we left the comforts of an expat life in Bangkok. Well, now you know. No fun living in a city where you are made to feel like an alien.

Permanent Residency in Canada seemed infinitely better. We were fluent in the local language; we could enjoy the awesome educational and medical benefits; and the biggest temptation of all – we could live close to nature, far from the madding crowd, smog and car honks without missing out on new-age conveniences.

Often enough, disapproving well-wishers reminded us of the the high taxes and freezing winters. It was also easier to picnic with the polar bears than visit our families back in India. But fact is how many countries embrace you, even before you set foot on their soil?

From ‘aliens’ in the country where we lived for a decade, to permanent residents in another we never visited, it was quite a contrast. At the Pearson Airport immigration counter, officers surprised us with a cheerful “welcome home”. Hah, we didn’t even know where the exit was!

The power of the Permanent Residency Card in Canada seemed as potent as Harry Potter’s wand. With just one wave under people’s noses, magic manifested. Stern Immigration officers broke into grins. Tough security guards turned helpful. It didn’t matter that we didn’t have their twang. We were one of the locals, not an alien here!

The ‘feel at home factor’ multiplied by the minute on leaving the airport. The country was not as ‘western’ as we had imagined. Our ‘paajis’ and ‘behenjis’ were everywhere. Ground staff, restaurant managers, security personnel, sales people, store owners…Indians in particular and South Asians in general ruled the roost.

A friendly Indian cab driver drove us to our slick serviced apartment in downtown Toronto. The Delhi connection between us melted his Canadian accent into a more familiar Ludhiana twang. He narrated his hardship story, scribbled his mobile number on a name card, nearly carried us with our luggage right into the living room, and cheerily drove away, promising eternal friendship.

Over the days, we realized every other South Asian cab driver was our ‘lifelong friend’. Pakistanis, Bangladeshis…whoever had any remote resemblance to us, would tell us their settling in stories, warn us of unforeseen challenges, pledge eternal friendship and drive off, never to be seen again.

Then there was the other breed – the white collared winners. The ones who truly inspired us! They owned sprawling homes, sported fancy cars and lived the dream life. They were suave, self made and successful.

To their credit, none of them had it easy. Each had his own horror story, more intriguing than the biggest Bollywood flicks. They had arrived a decade or more back with wives and children. They had camped with friends in dark desolate basements till they found survival jobs that ranged from selling wares, cleaning homes, driving cabs or spending time as security guards while they upgraded their skills in community centres or colleges. Most struck gold through property investment or business ownership.

They had all held top executive positions back where they came from, had a rough time here and finally made it big through sheer perseverance. They told us to keep going, come what may. Immigration was not for the faint hearted, they said. Once you had a steady income, there was no country like Canada they promised. There was dignity of labour. Even trash collectors earned well and enjoyed a decent life.

It was reassuring to know that so many who started off in a more pitiable condition than us were living it up now. The pep talk did us good. Back home, my husband carefully weighed out his subsidiary job options while looking out for the big break simultaneously.

Garbage collection stank. Not for him. Cleaning houses? Nah, not at this age with a rickety spine! Selling something was not a bad idea. However, the security guard bit really appealed to him. Many of the night guards seemed to have nothing much to do. They sat greeting residents or staring vacantly at the CCTV screens before them. Perfect! He declared he was off to apply the next day and dropped off to sleep.

I closed my eyes, drifting between a remote planet and our own. Through the whirls of the subconscious realm, I conjured up visions of our well-to-do friends dressed up in cheerleader outfits. They clapped and goaded on a bunch of green aliens scuttling across the race- track that carried a banner at the finish line screaming ‘Canada’! The faces below their green antennae were distinctly our own.

My ‘alien’ husband then morphed into a security guard, dozing off before a CCTV screen. Even in my dream I wondered that the only 6-pack he was familiar with were those that came with a ‘Heineken’ label. How could he chase thieves or offer any kind of security with his fitness level? I had to coax him into more intellectual pursuits.

As I dozed off slowly into slumber land, the moon hid behind the clouds. Light drizzle pelted down the window panes. The warm mid-summer July night turned chilly. From a hot 30 degrees centigrade, the temperature dropped down to 19 degrees overnight.

We woke up the next morning with our larynx inflamed. Our eyes bulged, noses were swollen, feet wobbled. The mirror showed us ferociously resembling the green aliens in my dream. The consequences of medical expenses without a health card slowly dawned on us. We had applied for it as soon as we arrived but except for my husband, none of us had received it yet.

No job, no health card, dwindling savings, increasing expenses and now alien-lookalikes. My dream was turning into a living nightmare.

8 thoughts on “Aliens on Earth”