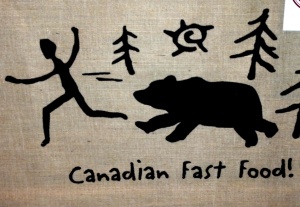 Quick, answer this question! Have you ever heard of a Canadian restaurant anywhere in the world? I rest my case.

We have searched high and low for local Canadian cuisine here but to no avail.

Most people don’t have a clue to what Canadian food is all about. Back in Asia, Canadian food stalls in International School Fairs always looked a bit starved, standing behind a tray full of sad sandwiches, sadder salads and tarts! The full tray usually stayed that way right till the end of the fair.

Ironic that in a country one seldom goes hungry in, there is no cuisine to talk about. While those brimming over with hungry people exhibit the most interesting cuisine. The most popular restaurants here in Toronto seem to be Indian, Chinese, Bangladeshi, Afghan, Lebanese, Turkish and Iranian. At the Islington subway station bakery, the hottest selling item is the Ja Patty – a Jamaican snack.

Even USA, a country built by immigrants and Canada’s bordering neighbour, has a stronger national food identity.

True, the food culture is still evolving with the inflow of new immigrants, none of who want to label their ventures ‘Canadian Cuisine’ yet.

Even the original natives of Canada, the First Nation people, couldn’t do much to market their Muktuk (whale skin and blubber munchies) or fermented rodent delights as well as their Mohawk hairstyles and face paint. The British and French remained busy bent over their own plates.

Despite that, Canadians in general seem cheerful. It doesn’t take them much to smile at strangers. It’s common to have the guy sitting next to you in the bus break into a friendly grin and spout verbal jazz on the weather at the very mention of “good morning”! It’s easy to see why. They say “cheese” all the time.

Sounds cheesy I agree, but it’s true! The nation is obsessed with this man-made version of milk. Canadians love feasting on cheese, serving cheese, churning out cheese and taking you around cheese factories. The word ‘cholesterol’ doesn’t seem to have made its way to this part of the world yet! Every second TV commercial worships some kind of cheese, cream or chocolate, very often a combination of all three.

Did you know that Canada is the largest consumer of Macaroni and Cheese in the world? The Canadian Cheese Directory lists at least 1050 varieties of cheese.

It’s also only in Canada that I heard about cheese-smugglers too. The devious crime happened last year when authorities busted a smuggling racket run by three cheesy men.

Cheese-smuggling? Mamma mozzarella! But really, you have to blame the Canadian government for this dark deed.

Authorities allow only a teeny tiny C$ 20 worth of duty free dairy products into the country! Expectedly, cheese is priced high, valued even more highly and allow interesting career opportunities to crooks who valiantly attempt to help out restaurants by supplying stolen stock from the US.

Sometimes things get even cheesier! Canada holds a Cheese Grand Prix every year since 1998. This year, over 225 varieties of cheese were entered. Only the finest cheeses churned out from Canadian cow’s milk are eligible for this competition. (Sorry buffaloes, goats and sheep! You need to find another country to elevate your efforts.)

This year’s Grand Prix winning cheese was the soft creamy Ricotta that blazed the charts of history by being the first fresh cheese from Ontario to win the award, snatching the title from more revered matured ones.

However, the cheese that has caused the most tongues to wag is the lesser valued, curdled one on the Poutine. No culinary invention has caused as much controversy as the Poutine either.

About a century after Basketball was invented in this country, Canada soared once again on the map with the advent of the Poutine!

1950 was a majestic year indeed. The year marked the reinvention of the potato. It gave the country something to celebrate in future Food Festivals and find sponsors to market at least one edible item from the country.

The story started in the suburbs of Quebec, about an hour from Montreal. An ingenious customer asked for his French fries to be topped with curdled cheese in a take-out bag much to the anguish of the restaurant manager. Fernand LaChance of Warwick was horrified. He protested about the mess it would make but consented nevertheless.

The restaurant eventually shut shop but the messy concoction lived on, taking on a new look and taste as it went along. By the late 1970’s, Poutine, as it was now called, made its way to New York and New Jersey where it was sold with beef gravy and melted cheddar to drunken pub hoppers.

Fortunately, cholesterol had not yet catapulted to villainous stardom in the 70s. The Poutine continued to rule, withstanding further destruction. Italians slapped Marinara sauce on the crispy edges; others went ballistic with bottled barbecue flavours, Allemande topping or chicken gravy. Hungry consumers looking for quick, cheap substitues lapped it all up, although fine diners turned up their noses at the commoner’s food. Over the years, the Poutine became popular with children who took it to the top of the food charts.

No one was more aghast about the potato going places than the local French-Canadians who prided themselves on their gourmet cuisine.

In 1991, Quebec politician Robert Bourassa declined to give his take on a pertinent Poutine-related question on CBC camera. Many other leaders followed suit with a non-committal stance, embarrassed to be even associated with this version of the potato.

Interestingly, ‘Poutine’ that translates to “fries with cheese and gravy” is said to be derived from the English word ‘pudding’. Today, Poutine has been refined and modified into several mouth-melting combinations. Some restaurants in Montreal serve up to twenty five varieties of the Quebec style Poutine alone which is essentially potato fries topped with cold, mostly Mozzarella cheese curds now, drizzled with a hot brown chicken, veal or turkey gravy. The trick is to gently warm the cheese without melting. The temperature is crucial to this concoction, without which the potato fries just disintegrate into a soggy mush.

My kids rapidly switched loyalty from regular French fries to Poutine within a few weeks here. At the Mississauga Square One Mall, the lines at the Food Court often stretch longer for Poutine than American and Asian fast food. Having said that, let me add that Poutine is not the end of Canadian cuisine!

Did I hear someone say what’s for vegetarians? Hey, c’mon, don’t be so fussy.

Didn’t we talk about 1050 varieties of Canadian cheese here?