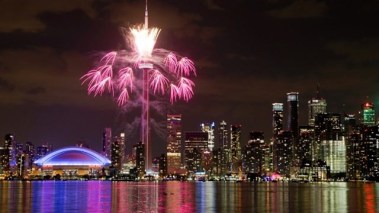 Summer in Toronto is not always primroses and tulips. There’s a joke that the region has two seasons. Winter and Construction!

While winter goes in a stupor dodging ice, hail and flurries, summer usually means dodging road blocks and building sites under construction. It’s worse for new immigrants like us who are left scratching their chin on which way to go.

But the city of Toronto had a pleasant surprise for us this summer. For the first time, constructions were wrapped up and roads rolled out like red carpets to welcome the 2015 Pan-Am games.

After an initially sleepy nod, ticket sales sky-rocketed! Canada’s phenomenal performance made it a historical June!

Nothing could take away the renewed sense of pride. There was suddenly more to talk about than poutine, politicians and the hottest “back-to-school” day in ten years!

The city woke up from a long slumber. National news of wilting strawberries in the scorching sun took a back seat. Tax debts were forgotten. Traffic congestion was forgiven. Social media sites were clogged with euphoric noise.

A unanimous wave of national pride commenced with the spectacular opening ceremony. Canada’s first gold medal on the very first day marked it up further.  Local winners like Andre De Grasse from Markham gave Torontonians even more reasons to bring out the flag.

After 16 long years, the country had ended its medal drought in the 100 meters world stage. Thereafter, it drizzled, rained and poured medals of all metals every single day.

The final overhaul of over 200 medals in the largest multi-sport event hosted in the country did it. Spectacular fireworks from the CN Tower outshone the northern lights. The city sprung up for a standing ovation, showered in champagne and took to the streets flaunting maple-leaf t-shirts.

It was not just the rush of medals Canadians won that lit the patriotic fire. It was the spirit of Torontonians themselves.  The city that thrives on fundraising gave the world a glimpse of their extra-large hearts.

The Pan-Am committee sent out requests for 23,000 volunteers. Over 63,000 applicants raised their hands.

The auditorium in each sport was packed to capacity with the “loudest” crowd ever witnessed by overwhelmed participants! Nothing could dampen the elation. Not even Kanye West’s lame finish to the closing ceremony.

Athletes raved about the hospitality of the Golden Horseshoe region (GTA) where the games took place. The audience was applauded for heartily cheering participants from other countries.

CBC news gushed about extraordinary gestures by ordinary citizens: the cab driver who returned a Cuban track athlete’s lost wallet; the bus driver who rushed a Mexican mom to her daughter’s swimming race.

The city sparkled. Construction projects that dragged on for years came to a glorious halt.  The rail link from Toronto Pearson International Airport to Union Station roared to life from June. Streets felt less like the surface of the moon and more like a smooth runway, ready for take-off!

Millions of chests puffed up with pride sparking a new discussion: had Toronto come of age to bid for the 2024 Olympics now?

Over half of Toronto gave the nod. Others are wary. Media sources protest that bidding is a severe dent on resources. It takes $50 to $60 million to qualify for the Olympic bid alone. Could a city on the brink of recession afford it? Would weighed down tax-payers support it? Are we ready for more construction and training costs? Are we ready to trade peace and tranquility for the security measures that the Olympics will demand?

Yes, we have the legacy left behind by the Pan-Am games.  Many facilities are already in place.  If the dollars are well spent, new job openings and fresh inspiration could well create a new chapter for the Canadian economy. As tourism soars, so would flight tickets, hotel and retail sales! Let’s hope it doesn’t cripple us with the price tag.

Canada revels in the diversity of its people. Perhaps it’s time for the country to unify its people now.